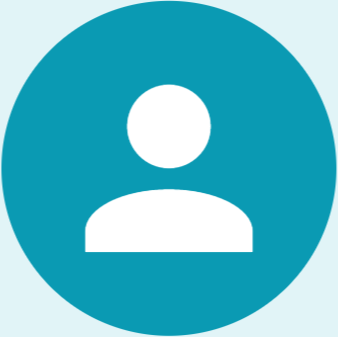 For a better user experience, we use cookies on the website. A small data packet, cookie, is placed on the user's computer device (including mobile phones). The purpose of the cookie is to ensure the highest possible level of operation of the site, to provide personalized services, and to increase the user experience.

Information / Inormation based on diagnoses / 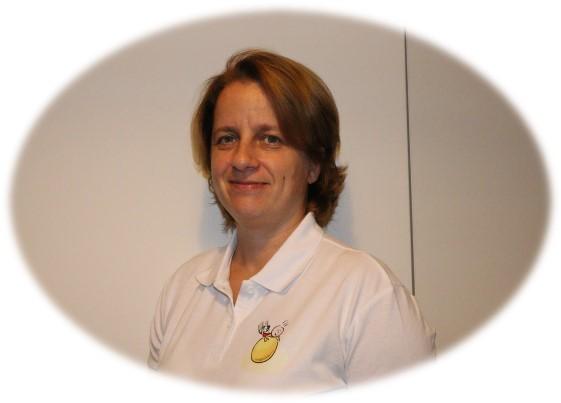 To view the mechanism of action of TSMT and HRG therapies in children with CNS injuries, click here!

The definition of CP (cerebral palsy) has long characterized this injury as a defined permanent growth condition. The resulting damage (occurring with cerebral haemorrhage, cerebral hypoxia) was described as a direct consequence of the injury, typically accompanied with motor disorders. Today, in recent studies there are attempts to redefine the concept of CP: development of CP is a consequence of a pathological brain development process, triggered by the primary brain injury. (Kolb, 2001, Marianne Berényi – Ferenc Katona: Developmental neurology). The word process indicates that CP, as a central nervous system injury, is not viewed as a persistent disease, but rather as a non-progressive and constantly changing condition. (2005, Bax et. al). The typical symptoms and the intensity, as well as the effect of the deficiency are individual in each case, even if there are certain similarities. Associated with CP, the study mentions symptoms such as epilepsy, mental disability, learning difficulties, delayed speech development, sensory disturbances and behavioural problems as well.

Most of the damage causing CP affect the foetus before birth, with a smaller proportion of occurrence during or immediately after birth. Besides, CP can be caused by infection during pregnancy, by placental insufficiency, hypoxia, stroke or traumatic birth as well. Researchers do not yet know why in some cases these antecedents lead to abnormal developmental processes, while in other cases the child remains asymptomatic. 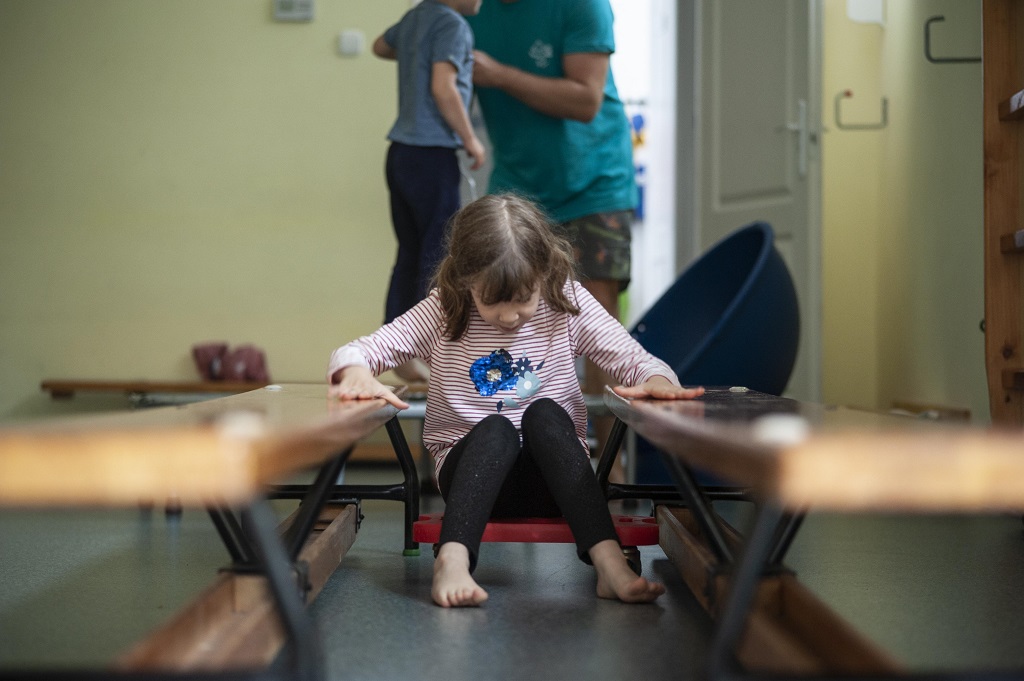 Early detection and intervention are crucial, since the sooner the therapy begins, the greater the chance that the process can be turned in the best possible direction for the child, with an improvement in his quality of life. The recognition that the injury changes the process of development itself further confirms the view that a timely started and well-managed development can lead to an improvement in the child’s status. Several studies have confirmed the plasticity of the brain, due to which in certain injuries it is able to build new neural pathways between different brain regions, while the environment of the damaged areas can take over the lost functions in children. Naturally, the effectiveness of the development is influenced by the extent and location of the injury, as well as the adaptability of the intact regions and the environmental and emotional factors influencing the child.

What signs can parents perceive?

In some cases, the injury causes recognizable symptoms right after birth, but it is often the case that the parent first perceives the delayed development or lack of development, and the reasons are revealed later. In addition to delayed or abnormal motor development, pathological postures and movements may occur, there may be differences in social behaviour (lack of focus or reactions to those around) and the muscle tone may be way too tight or loose. Reflex anomalies or eating difficulties may be symptoms of the injury as well. A thorough neurological and developmental neurological examination can help identify the causes, and as soon as the diagnosis is made, developments can be started. There are several methods available in Hungary for the treatment of central nervous system injury, such as neurorehabilitation, conductive pedagogy and the Bobath and Vojta therapy. 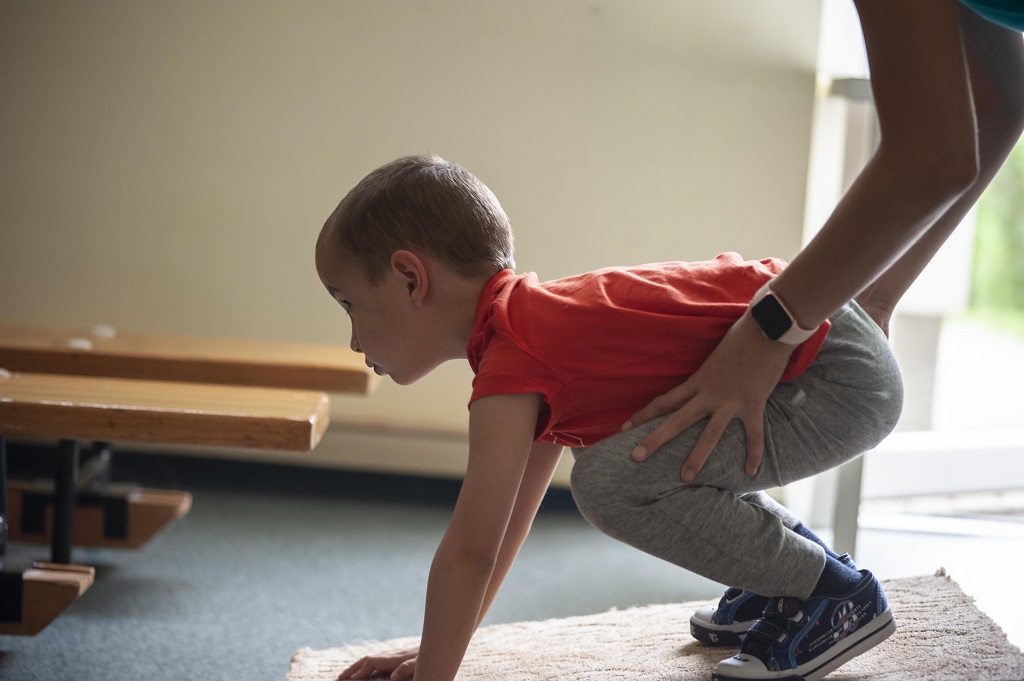 How can TSMT and HRG help?

HRG and TSMT perfectly complement the above mentioned methods. They use stimuli and postures in a targeted manner and with consideration of the training theory, which promote neuronal maturation and help connect the previously dysfunctional neural pathways and cross channels. HRG and TSMT do not aim at developing the locomotor system only, but through different stimuli, also seek to achieve their proper processing, with developing appropriate responses to those stimuli. In case of a central nervous system injury, due to the injury of the neurotransmitter channel, the right information from the motor centre will not reach the muscles, and the child will not be able to perform certain movements automatically. Tasks performed repeatedly and in different situations, vestibular stimulation and activation of several channels of attention can help trigger maturation of the nervous system in the child.

In therapy, it is possible to perform tasks that do not require the child’s activity, so they can be started and used even in case of serious injury or non-cooperation. By rocking the child in various ways, by getting him off balance, by activating motor responses to those movements and by changing the intensity and amount of vestibular stimuli, even children who are unable to perform independent, voluntary movements may be involved in therapy. Since the tasks are built on each other and thus their level of difficulty can be increased, it is possible to find a pace that corresponds to the child’s stage of development. However, it is important for the therapist to consider the child’s condition and neurological status when choosing the intensity of stimuli, since a poorly designed set of tasks can overwhelm the child, which can cause deterioration or relapse in his status. 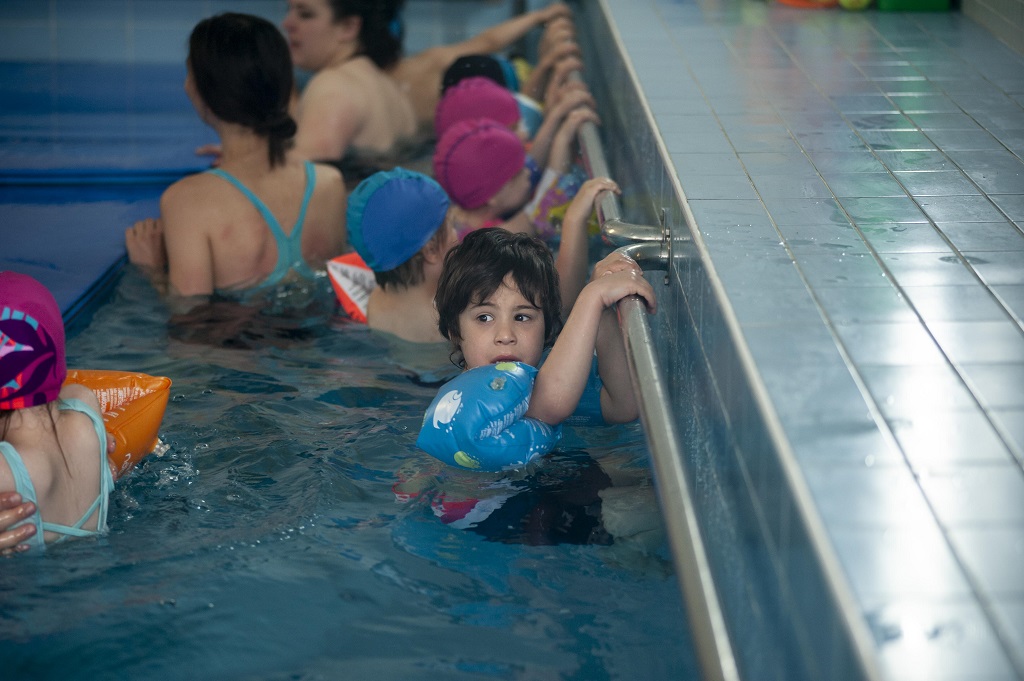 In the HRG-development (Hydrotherapy Rehabilitation Gymnastics), due to the buoyancy of the water, the tasks and movements will be easier to perform and, in addition, water as a medium provides continuous tactile, vestibular and proprioceptive stimulation as well. Warm water helps relax the muscle tone, and movements performed in water mobilize the joints, helping children develop a posture which they would not be able to perform on land.  A variety of tools, such as planks, swim rings, inflatable floats, ropes, floating water mats, and countless tasks are available to develop water-based postural control (head- and trunk control) and the proper use of hands and balance responses. With the help of tools it is possible to practice postures of the ontogenetic development process, to strengthen the support reactions and cocontraction, to establish motor automatisms, and to maintain bilateral coordination in movements using both sides of the body. Water-based exercises are special, as the medium itself is unique, and the therapy becomes more of a game for the child, even if performance and repetition of the tasks require a lot of effort, perseverance and monotony tolerance.

The tools used in TSMT, in dryland therapeutic exercise, provide an opportunity to develop balance, supportive and symmetrical postures. To practise equilibrium responses that are difficult for children with CP, exercises on a tilting board and skateboard may help. Since the locomotor system is also involved in most of the children, postural rehabilitation is an essential part of the therapy. Accordingly, both in tasks which are performed lying on floor without load, and in tasks on all fours on the gym, ball or the tilting board, and in each set of movements performed in upright position, the key role will be played by adjusted postures, appropriate load on palms and soles, symmetrical strengthening of muscles, active bends and stretches, and maintenance of the established postures. The tasks for children with CP and the tools used for TSMT do not differ from those used by their peers, but the structure of tasks must occasionally be customized to the physical abilities and the developmental stage of the child, and the tool used must be adapted to his or her capabilities. Based on the diagnosis and symptoms of the child, priority can be given to certain tasks. In case of unilateral involvement, for example, symmetrical tasks and postures used with identical intensity of movement in the two sides of the body are of crucial importance, whereas in a child with ataxia, where imbalances represent a major challenge, achieving balance on the tilting board and the gym ball and tasks for triggering adaptive motor responses should always be present. In case of differing, changing muscle tone, sufficient time should be allowed to form and hold a position, as well as for the prevention and correction of abnormal postures and contractures. In this case, the therapist will consider how the child’s other aids can be incorporated into the line of tasks depending on the purpose of the task. This way, there will be tasks recommended to be performed in shoes, while others barefoot.

Since it is an important goal to activate as much of the cerebral cortex as possible, the tasks activate the brain region responsible for speech (synchronization of speech and movements), which at first may seem unnecessary for a non-speaking child, but rhythmic repetition of nursery rhymes and songs in sync with movements can help trigger speech development. Cognitive tasks hidden in the line of other exercises, such as touching or knocking over an object, putting a cube in a box, assembling, counting, sorting, pairing, selecting, retrieving pictures, words and memories, may encourage the child’s learning skills. When building up HRG and TSMT tasks, close physical contact with the parent during the tasks plays a significant role, which strengthens social skills and relationship building, since in this case the therapist’s relationship with the parent is quite special: he or she does not only guide, but also supports the family on the road to success.

In therapy, great emphasis is placed on regularity, planning, and repetitions, which are adapted by the therapist to the child’s developmental goals, with consideration of the family’s resilience and possibilities. Since the tasks are designed to be challenging for the children, but still feasible for everyone, by the end of sessions children will be able to complete the tasks with a sense of success, easily performing movements and tasks that were difficult at first.